……………Abia State has been formally readmitted into the Public Sector Governance Reform and Development Project, a program of the World Bank that provides support for the “improvement of transparency, accountability and quality in public finance and human resource management systems with a view to strengthening governance in participating states”.

According to representatives of the World Bank Country Office in Nigeria, Abia was delisted from the program some years ago for failing to key into the reform process. But in the words of the World Bank representative, ” THE TIDE CHANGED WITH THE EMERGENCE OF THE PRESENT ADMINISTRATION WHEN IN EARLY 2016, GOVERNOR IKPEAZU VISITED THE WORLD BANK COUNTRY OFFICE…”

According to the World Bank 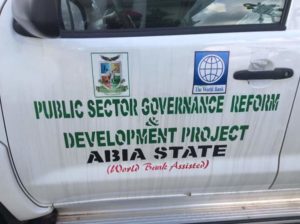 representative, when the Governor made “a strong and compelling case” for the readmission of Abia into the project, the bank was skeptical about the commitment of the State Government to ensure the conclusion of the implementation of the project but the Governor made a firm commitment to push this through and mandated the Finance Commissioner, Obinna Oriaku and his Economic Adviser, Dr. Chukwuma Agu to do all that was necessary in this direction and personally led the efforts of the team. 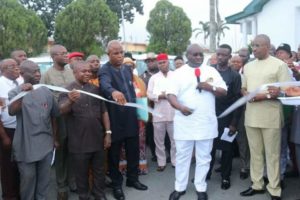 To realize these goals, the World Bank identified some key Activity Executing Agencies like the Board of Internal Revenue, Abia State Planning Commission, Offices of the Accountant General and Auditor General, Bureau for Public Procurement and the Debt Management Office under the Ministry of Finance.

After reviewing the efforts of the State Government in this direction, the World Bank is satisfied that Abia is indeed committed to ensure the success of this key project and has moved to readmit the state into the project.

Yesterday at Government House Umuahia, representatives of the World Bank came to formally present 12 brand new project vehicles as a sign of this new partnership with the State Government.
The Bank congratulated the State on this feat and assured the people of the State of their readiness to continue to partner with the state in the area of reforms. They particularly thanked Governor Okezie Ikpeazu for his personal involvement and commitment to this project which ensured its success and for ensuring that after several years, the state government and the World Bank signed the relevant agreements for the readmission of the state into the project. They said that the Bank is impressed with the courage, determination and political will exhibited by the Governor in this project.

An elated Governor Ikpeazu thanked the World Bank for giving the state a second chance and assured that he will personally ensure that the state is not delisted again from such critical projects that are targeted at improving operations of government for the good of our people. He further assured that the State will continue to explore opportunities to work together with International Development Agencies in all areas of governance and will continue to honor all counterpart funding obligations.

For those who understand the strategic importance of partnering with international development agencies and the role played by these agencies in development, this readmission is a huge achievement for this government and for our state which will open more doors for our state and improve our ranking on the index of states in the eyes of these international agencies.

Commissioner for Finance, Principal Secretary to the Governor, Executive Chairman of the State Board of Internal Revenue, other top officers of the state government and officials of the World Bank Nigeria Country office were at the event.