IN THE NEWS: FG has refused to release Government Support Fund to Rivers State -Governor Wike

Governor Wike said that official sources noted that the Budget Support Fund for Rivers State was witheld because of the governor’s critical stance on national issues. He said all other states have received the fund. 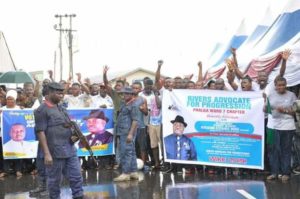 The governor said the arm-twisting tactics of the APC Federal Government will not stop him from standing for the people of Rivers State and the Niger Delta.

“Nothing will stop me from defending Niger Delta and Rivers State. They denied Rivers State Government Support Fund which has been given to all other states. 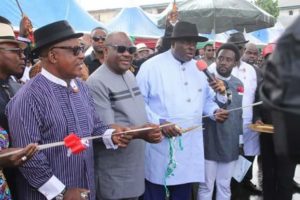 “They denied Rivers State this fund, claiming that I should stop criticising the Federal Government. Stopping our funds will not stop me from defending Niger Delta and Rivers State “, he said.

The governor said that the roll out of projects will continue across the state because his administration is committed to sustained development.

On the three roads commissioned by Former Delta State Governor , Governor Wike said that his administration is committed to enhancing the living condition of the people of Port Harcourt Township.

He directed Julius Berger to reconstruct the remaining roads in Port Harcourt Township, adding that all the three roads will be furnished with streetlights.

“The residents of this area will agree with me that their roads were not motorable. I resolved that we must reconstruct the roads”, he said.

“I associate myself with the commitment of the Rivers State Governor to infrastructural development of the state . I am glad that the governor has made further commitment to develop this area”, he said.

The commissioning programme was witnessed by the National Chairman of PDP, Prince Uche Secondus.