………..The wife of the state governor, Mrs. Martha Udom Emmanuel, Tuesday, flagged-off the first round of the Maternal and Neonatal Tetanus Elimination (MNTE) Campaign in the state at the Primary Health Centre in Uyo Local Government Area. 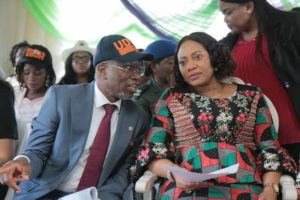 Mrs. Emmanuel while noting that the goal of the campaign is to achieve less than one case of neonatal tetanus per 1000 live births per year in every local government area in Nigeria by 2020, charged expectant mothers to take advantage of the programme.

She said the strategies employed for the campaign are; clean delivery cord care practices, immunization / protection with tetanus vaccine for pregnant women and neonatal tetanus surveillance which is part of active surveillance system that looks for cases of the disease as well as other diseases like polio, measles and yellow fever. 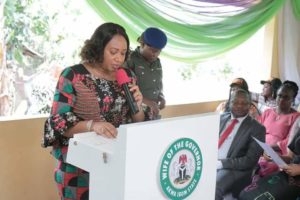 The wife of the state chief executive further added that the flag-off is a demonstration of her commitment to the eradication of childhood illnesses and a reduction of maternal and child mortality rate in the state, stating that immunizations will be given at all health facilities and other designated areas like schools, places of worship, markets and village halls.

While charging all local government areas in the state to key into the programme, the first lady also called on all parents and caregivers to make use of the opportunity as it is free, safe and effective.

He said the campaign which targets women of child bearing ages between 15-49 years, would be spaced over two years for women to be fully immunized against maternal tetanus in order to protect new born babies of such women from developing neonatal tetanus.

Also speaking, the Chairman of Uyo Local Government Area, Hon. Imoh Okon while welcoming the governor’s wife to the flag-off said he hopes to partner the state government to transform the Primary Health Centre into a cottage hospital, asserting that the facility has been delivering services to all Nigerians resident in the state capital.

In their separate goodwill messages, the UNICEF representative, Dr. James Adanini, Director Social Mobilization in the Primary Health Centre, Mrs. Ama Isreal and the leader of Muslim community, Olaleye Adams, all thanked the government for proving the enabling environment for the programme to take place.

They said they were ready to take the campaign to all designated centres around the state and as well called on government to do more in ensuring that logistics are provided to meet those in the hinterlands.