…………..The international body of the Akwa Ibom Students, NAAKISS has unanimously adopted Gov. Udom Emmanuel for reelection come 2019, as the students mandate, this was made known in the NAAKISS 6th Legislative Assembly plenary session held recently in Uyo. 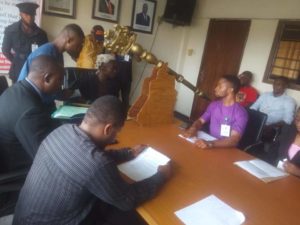 In attendance of the plenary was the Honourable Commissioner for education who was represented by the Desk officer of the ministry Mr. Salong Salong, NAAKISS WORLDWIDE President, members representing their respective constituencies across Nigeria.

Addressing the plenary, the Speaker of the 6th Legislative Assembly expressed satisfaction in the person of Gov. Udom Emmanuel who happens to be the Grand Patron of the international students body, for his untiring support for the students, stating that he has been good to the students community and he is presenting him to the students community for reelection come 2019, which will see him in the Hilltop Mansion till 2023 “for one good turn deserves another”. 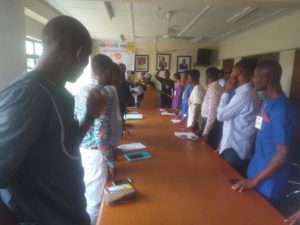 Moving the motion for the adoption of Gov. Udom Emmanuel as the sole candidature of the students to mount the Hilltop Mansion again come 2019, in a bill written and sponsored by Hon. Christopher Titus Udo who is the deputy speaker of the NAAKISS worldwide Parliament, 6th Legislative Assembly and duly seconded by Hon. Ubong Sampson, member representing Uwana Polytechnic, Ebonyi State.

The deputy speaker reiterated the support of the international students body for Gov. Udom Emmanuel in a bill sponsored by him, in his words he said “Show me a man who has been Divinely Ordained to transformed the state to an Industrial Hub and centre for commerce, peace and tranquility and I will show you His Excellency, Gov. Udom Emmanuel, to whom much is gained from deserves more come 2019, much will be given for his second term bid. 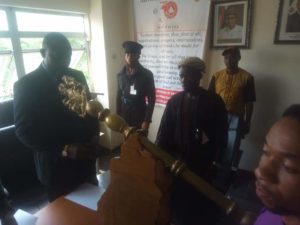 The bill which scaled through a second reading in the Assembly, got an unanimous YES for Gov. Udom Emmanuel to be adopted by the students as their sole candidate for reelection come 2019 was passed into Law by the the speaker of the NAAKISS worldwide 6th Parliament, and has now mandated the entire Students community to do whatever humanly possible to return Gov. Udom to Hilltop Mansion come 2019. 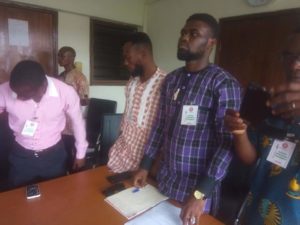 An excerpt from the bill read thus, ” members of the 6th NAAKISS Worldwide Legislative Assembly who collectively are representing, soliciting and advocating for and on behalf of over 5million Akwa Ibom state students across the globe are poised and proud to unanimously plead, preach, campaign, rally and project the Image of our dear Governor as the sole candidature of the students to Mount the Hilltop Mansion again come 2019″. We are convinced by our boss actions concern and support towards the development of the students mostly in the areas of Academic grants, scholarships, infrastructural development and his high emphasis and campaign for the promotion of mass literacy in the state, and is the reason he is been presented for adoption and our support.

In preparation for the much anticipated NAAKISS worldwide election, the international president Comr. Aniefiok Edet NAAKISS worldwide while presenting the names of the proposed Electoral Board for the election to the Legislative body for screening, the president said that it was imperative for the election to be conducted to avoid more tenure elongation which as been a more concern of the association for the last 12years.

Applauding the Assembly and the assembly deputy speaker especially for moving the motion for the adoption of Gov. Udom Emmanuel, he noted as a good move the Legislative Assembly as taken and reassured Gov. Udom Emmanuel that come 2019 the entire students community will stand by the Governor to make sure that he returns to the Hilltop Mansion Unstamped.

The representative of the Honourable Commissioner for Education Mr. Salong Salong expressed satisfaction in the proceedings of the session and restated the readiness of the Governor to bring to and end to the crises in NAAKISS and that the ministry is ready to support the association to conduct NAAKISS worldwide election soon. He further charged the student body to work together and speak in one voice and NAAKISS will be great again.