………………Governor Udom Emmanuel has inaugurated the newly elected thirty-one Local Government Chairmen in Akwa Ibom State with a charge on them to always listen and work to meet the needs of the people at the grassroots.

The Swearing in of the new council helmsmen alongside their deputies, took place on Thursday December 9, 2017 at the State Banquet Hall, Government House, Uyo. 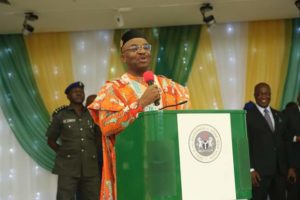 Governor Emmanuel congratulated the Chairmen on their emergence and warned against presentation of excuses for failure by the Chairmen.

He advised them against seeing their new position as a platform for immediate gratification or an avenue for conspicuous consumption to the detriment of the voters.

Governor Emmanuel said as those who have been elected to represent the interest of people at the grassroots and interpret the vision and governing principles of the state’s administration, the Chairmen must not fail the people. 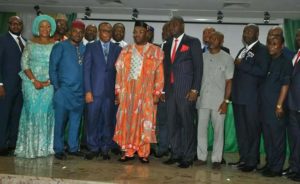 He charged them to let the local council administration remain true to its foundational principle which is predicated on the unwavering commitment to rendering service to the people.

“You are not on a course for applause but on a journey that is measured on solid delivery of service to the people. Once you are able to achieve that, the people will, in turn, give you a standing ovation for meeting them at the intersection of their needs”. The Governor advised.

The State Chief Executive enjoined the Council Chairmen to be transparent, innovative, decisive, forward looking and tough without being dismissive or arrogant.

He said his administration will always support them by working in close partnership to continually inspire Akwa Ibom people to claim the faith of their greatness.

Mr Emmanuel thanked the Transition Chairmen who had held forte, for a job well done and wished them well in their future endeavors.

He also congratulated the Akwa Ibom State Independent Electoral Commission, AKISIEC for ensuring a free, transparent and peaceful election that has been celebrated nationally by the Inter-Party Advisory Council of Nigeria, IPAC, Conference of Nigerian Political Parties, CNPP and Independent Observers who monitored the exercise.

The ALGON Chairman who later spoke with journalists commended Governor Emmanuel on his pragmatic leadership approach and promised, on behalf of his colleagues, to work in order to achieve the purpose of the third tier of government.