………………As part of its Cooperate Social Responsibilities to the general public,
the MTN Foundation is exploring areas of partnership with the Family Empowerment and Youth Reorientation Path-Initiative (FEYReP) to render free quality services to the less privileged members of the state.

The Chairman of MTN Foundation Board of Trustees, Prince Julius Adeluyi disclosed this Tuesday evening, when he led members of staff of the foundation on a familarization/dinner with the progenitor of FEYReP, Mrs. Martha Udom Emmanuel at Government House, Uyo.

Prince Adeluyi speaking was full of praise for the governor’s wife for her works through FEYReP and for inviting them to the Hiltop Mansion, saying they were in the state for their first ever retreat outside Lagos State. 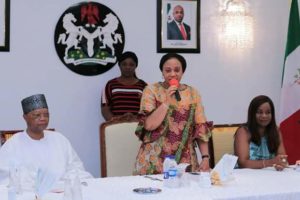 He noted that the visit has afforded them a rare opportunity to have first hand assessment of things on ground, assuring that the Foundation consider it noble to contribute its quota towards the development of the state.

“Over the years, we have been providing healthcare services, educational support and empowerment to help reduce poverty and foster sustainable development in Nigeria, as a Foundation , we are poised to creating a synergy with FEYReP to touch more lives in the state.” Said Adeluyi. 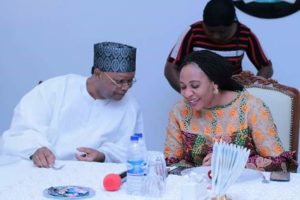 He also congratulated Governor Udom Emmanuel for his ingenuity in managing the affairs of the state, pointing out that the state currently rank high in GDP calculation of the country.

Responding , the wife of the Governor, Mrs. Martha Udom Emmanuel thanked the Foundation for having considered the state for its retreat, saying it would not have been kind of her if she failed to host them.

She specifically appreciated the Foundation for its past free eye medical out-reach in the state , affirming that it helped restored sight to so many in the state. 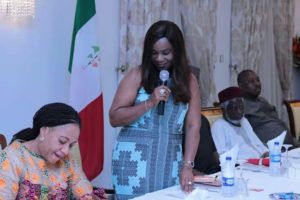 “I thank you for the services you rendered to our people in 2016, and I must say that that intervention ameliorated the sufferings of so many in the state.” Mrs. Emmanuel noted.

The governor’s wife further appreciated the MTN Foundation for its laudable programmes and specially solicited partnership in the area of empowerment for rural women.

She said ” FEYReP as an organisation have empowered over 3000 rural women in the state knowing well that when women are empowered , the family is empowered. Let’s work together in this regard and touch more rural women.”