……………..The Peoples Democratic Party PDP in Nsit Ibom Local Government Area have been urged to always remain loyal and faithful to the government of Mr Udom Gabriel Emmanuel’s led administration in the state. This charged was handed down to the people by a son of the soil and a former state Secretary of PDP, Otuekong Anietie Ekong when he hosted the Stakeholders, Chapter Excos and Ward executives of PDP in Nsit Ibom Local Government Area.
Tagged ” thank you parley”,. 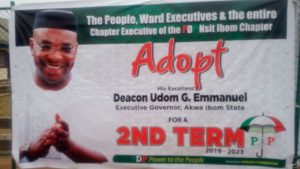 The former state Secretary of the asserted that Nsit Ibom had many reasons to remain loyal to the party and to the state chief executive whom he described as a humble, dedicated, focus and visionary leader that has the interest of the party, Nsit Ibom people in particular and Akwa Ibom State as a whole at heart. He said this has be replicated through his industrialization drive and all inclusive governance.

He equally extolled the sterling qualities of the political leader Otoekong Idongesit Nkanga whom according to him has brought stability to the politics of Nsit Ibom. Here him, ” I am extremely happy by the leadership qualities of Nsit Ibom political leader His Excellency Otuekong Idongesit Nkanga who has found in me worthy and approved the gathering of Nsit Ibom party structure in my compound, and to all of you that have found out time to come despite the short notice of this event I say thank you very much may God almighty bless you”. 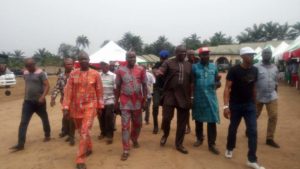 Otuekong Ekong also used the opportunity to thanked the state Chairman of Peoples Democratic Party who is also the Chairman conference of State Chairmen in Nigeria, Obong Paul Ekpo for his leadership prowess at the state, chapter and ward levels. The former party officer equally commended the chapter chairman Rt. Hon.Deac. Nsikak Ikpe and the entire party stakeholders in Nsit Ibom for restoring him back to the state caucus of the party despite the fact that he just returned from the All Progressives Congress.
Here him” we are not here in this meeting for any of our aspiration but for the adoption of the re-election of His Excellency, Mr. Udom Emmanuel for a second term in office come 2019. So therefore, on behalf of the political leader of Nsit Ibom, Chapter Chairman and the entire Stakeholders, I promised to ensure the re-election of our governor deacon Udom Gabriel Emmanuel come 2019. According to Hon Ekong, Uyo and Ikot Ekpene Senatorial Districts have had their eight years respectively as governors, so what is sauce for the goose is also sauce for the gander. Now is the turn of Eket Senatorial District to stay in office as governor for eight years, even as the governor has proven himself to be focused and committed to the development of the state in view of his achievements even in the midst of the biting economic crisis “. 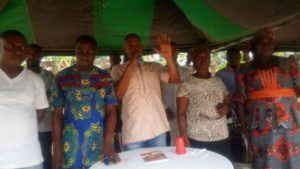 In his remark the state party chairman Obong Paul Ekpo thanked the State Governor Mr Udom Emmanuel for his developmental strides in the state pointing out that such unprecedented achievements has make their job cheaper just as the 2019 polls draws nearer,” let me also thanked the political leader of Nsit Ibom, Otuekong Idongesit Nkanga, the only performing Chapter Chairman in Nsit Ibom, Obong Nsikak Ikpe for the job well done in Nsit Ibom”. He described the hosting of the meeting as timely with the presence of the former state secretary of PDP Otuekong Anietie Ekong whom he also described as a strong and reliable force but wondered why he called himself former APC member of which he knows too well that he has never won any elections any other platform except for the PDP. 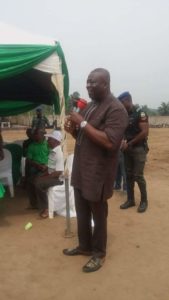 He used the opportunity to assured them that he will convey to His Excellency Mr Udom Gabriel Emmanuel that Nsit Ibom people have reaffirmed their support and endorsed him for a second term in office come 2019. Consequently, urged the people to make good used of the ongoing voters registration which he described as a catalyst for winning any election . 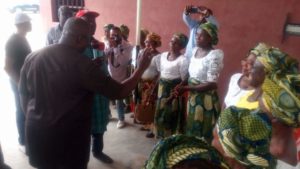 Speaking earlier, Rt. Hon. Decon.Nsikak Ikpe,the PDP Chapter Chairman, thanked Obong Paul Ekpo for finding time to come to Nsit Ibom. He intimated the State Chairman that the party structure in Nsit Ibom remains intact for His Excellency Governor Udom Emmanuel. He equally commended the political leader of Nsit Ibom, His Excellency Otuekong Idongesit Nkanga for his fatherly role in the area.
” Sir, it has never happened before in the history of Nsit Ibom for the entire party structure to gathered in someone house except today that all of us decided to honoured Otuekong Anietie Ekong who was the former head of the party secretariat in Akwa Ibom State and I want to thank him specially for calling this meeting”. 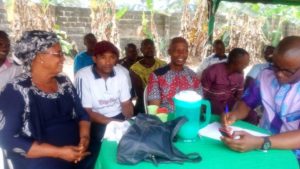 According to the Chapter Chairman, ” I say it wherever I go. I don’t know what would’ve been our fate if we did not have a governor in the mould of Mr Udom Emmanuel at a time like now. Go to other states and you’ll be amazed that the regular payment of salaries to civil servants and pension to retirees which we take for granted, is a luxury worthy of celebration and with this and many more infrastructural expansion across the state I can assured you that PDP will walk in to the elections and come out victorious”.
The parley witnessed free flow of interactions,and other entertainment packages.
Meanwhile among those Present at the Thursday, February 7, 2018 event which was held at the private kingdom of Otuekong Anietie Ekong’s home town in Mbiokporo 2, Nsit Ibom Local Government Area were the 18 chapter and 170 ward executive members of the party, Village head of Mbiokporo 2, Obong Sunday Ekong, House Leader Nsit Ibom Legislative Council, Hon. Akan Ofong and cross section of women from Mbiokporo 2.

High point of the event was a motion moved by the former State Secretary of the PDP, Otuekong Anietie Ekong for the adoption of His Excellency, Governor Udom Emmanuel for a second term in office come 2019, and seconded by the Chapter Chairman of Peoples Democratic Party, Hon Nsikak Ikpe