………………Rivers State Governor, Nyesom Ezenwo Wike has declared that the Peoples Democratic Party (PDP) still exists today because of the investment and commitment of South-South members and leaders of the party.

He urged the PDP from other zones to extend their gratitude to leaders and members of the PDP from the South-South for their commitment to the survival of the PDP.

The Governor spoke at the PDP Zonal Congress in Port Harcourt on Monday. 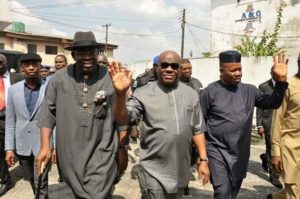 He said: “If PDP leaders and members from the South-South are not committed, there wouldn’t have been PDP today.

“It is important that PDP members from other zones of the country congratulate South-South PDP members for their steadfastness at a time PDP was in crisis “.

He urged PDP members from the South-South to remain resolute in their support for the growth of the PDP.

Bayelsa State Governor, Seriake Dickson said: “We are in very trying times . We are in opposition, facing a very fierce and ruthless government at the Federal level. This is a time the governors need your support “. 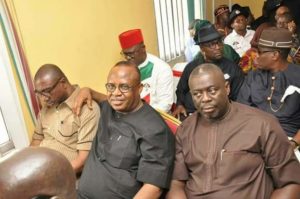 Senate Minority Leader, Senator Godswill Akpabio said for the stability of PDP, it is necessary for the Next Chairman to come from the South-South .

“It is important we stabilise the PDP. That is why we need a Chairman of PDP from the South-South “, he said.

Former External Affairs Minister, Chief Tom Ikimi said that the PDP cannot afford to allow the South-West produce the chairman because it is prone to crisis.

National Vice Chairman of PDP, South-South, Elder Emmanuel Ogidi said that the South-South will work with other zones to strengthen the party.

The congress attracted PDP leaders from all the six states of the zone.