IN THE NEWS: 2019 AKWA IBOM TECHNICIANS DECLARE FOR GOV EMMANUEL

………A group of technicians under the umbrella body of National Automobile Technicians Association (NATA), Akwa Ibom Chapter, has joined forces with several other groups and organisations to canvass support for the second term bid of the State Governor, Mr Udom Emmanuel, come 2019. 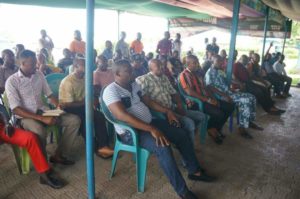 Speaking with newsmen shortly after an elaborate meeting with members of the union on Tuesday, the State Chairman of NATA, Prince Aloysius John JP, stated that their decision was informed by the leadership quality of the Governor in the state, and that he has given them a sense of belonging and created enabling environment for them to operate upon which he said has never been in the history of the state.

He further disclosed that another thing that endeared them to declare their support was when the Governor, without being informed, announced the donation of an 18-seater bus for the union while also promising to relocate them to a more convenient area.

Prince Aloysius noted that the entire technicians in the state have resolved to stand firm towards ensuring that come 2019, Gov Emmanuel emerges winner. “We are ready and working tirelessly to ensure that NATA supports the Governor during the 2019 general elections because we have seen a lot that his government is doing.

“This is a government that recognises people like the Technicians. Nobody ever recognised us in the history of Akwa Ibom State. Before now, we were ignored and seen as illiterates, but today, we are proud to say that we have a sense of belonging as we have been issued a certificate with the Ministry of Transport.”

The State Auditor General of NATA, Akparawa Charles Francis Ekah, stated that there is cordial relationship between the union and the government to the extent that the Governor paid an unscheduled visit to them.

It could be recalled that Governor Emmanuel, on his return from the inauguration of the new Secretariat Complex for Nigerian Union of Local Government Employees (NULGE) on Monday, stopped over at the Mechanic Village along Abak Road, Uyo, where he was warmly received by a cheering crowd of Technicians, acknowledged the contributions of the Technicians to the development of the state, and announced the intention of his administration to relocate them to an ultra modern Automobile Workshop currently under construction at Ikono Uyo, within the Uyo Capital City.