IN THE NEWS: 2019 Ikot Ekpene,Eket Unite For Udom Emmanuel 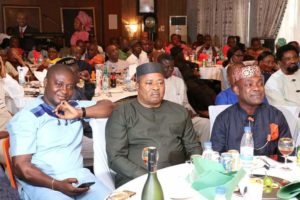 The delegation from both districts had House of Representatives and House of Assembly members from the two districts, members of the state executive council led by the deputy governor, Moses Ekpo, local government chairmen led by ALGON chairman, Frank Archibong, chapter chairmen of PDP,members of the state working committee of the party from the two districts, serving and former political office holders,and other category of major stakeholders. 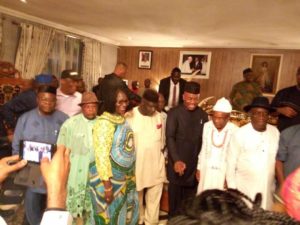 The Eket leaders led by Chief Nduese Essien, used the occasion to restate their appreciation to Senator Godswill Akpabio and the entire Ikot Ekpene senatorial district for their role and support that led to the emergence of Governor Udom Emmanuel in 2015.

Chief Essien maintained that Governor Emmanuel has not disappointed despite the financial crises in the country and has used his ingenuity to ensure the spread of projects and political appointments across the state.

He said Ikot Ekpene had gotten a fair share of the projects and appointments, adding that when given the support for a second term in office, most of the foundation he laid will blossom and the state will be better off. 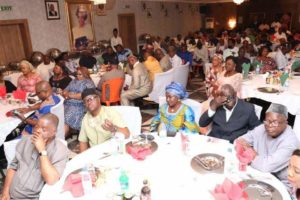 Others who spoke from Eket senatorial district, Chief Obot Etukafia and Dr. Esio Oquong Udo eulogized Senator Akpabio for the giant strides that he recorded during his tenure as governor, adding that none other than Udom Emmanuel could have consolidated and raise the state to a higher pedestal.

They reiterated that when Uyo and Ikot Ekpene had their turn of eight years, it was with one governor each and urged Ikot Ekpene to continue in their grassroot mobilization so that their votes will count.

They said it was logical for the Eket stakeholders to come and consult and appreciate their kinsmen in Ikot Ekpene, and promised that the governor will continue to have their support.

On his part, Senator Akpabio said such gestures of consultations were very important in lubricating democratic ideals.

He said the Ikot Ekpene district leaders will always take decisions that will promote their interest and development, and expressed satisfaction with Governor Emmanuel’s performance.

Identifying leadership as the reason for the unity among elders in his senatorial district, the former Governor reiterated their position that for 2019, Udom Emmanuel remains the best.

Senator Akpabio assured that his wife, Mrs Ekaete Akpabio was going to join the women of the state in campaigning for the Governor’s re-election, and was ready to receive her campaign materials and learn the campaign songs when such time comes.

The deputy governor of the state, Mr Moses Ekpoudoms said the Governor has remained upbeat in developing the state.
He said there was no need to panic about any opposition, as the governor has endeared himself to everyone with his sound leadership principle.