…………..AS PART of efforts in encouraging budding entrepreneurs, the Peoples Democratic Party, PDP, Akwa Ibom State, Wednesday, presented cash prizes to Season One winners of the Umbrella Business Quest at a ceremony held at the State party Secretariat, Uyo. 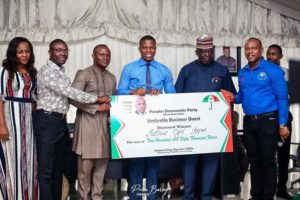 Two contestants from the maiden edition of the elimination series, Oduduobong Ndiok and Inyene Johnson received Consolation prizes of N50, 000 each courtesy of Dr Iniobong Essien, Commissioner for Environment and Mr Akan Okon, Commissioner for Housing and Special Duties. 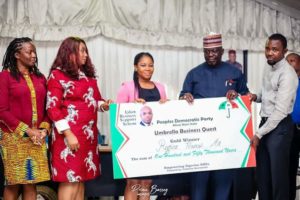 A Business Icon Award of N500, 000 was also presented to Eyo Tailoring for being an outstanding indigenous entrepreneur who has operated consistently for more than a decade.

State PDP Chairman, Obong Paul Ekpo who made the presentations advised the beneficiaries to make judicious use of the business grants, while thanking the Publicity Unit of the party anchored by Com Ini Ememobong for carrying out a transparent and well organized programme that goes in tandem with the entrepreneurial drive of the State Government.