……………….Akwa Ibom State Government has set up modalities to address the discontentment raised by the host communities of the Godswill Akpabio International Stadium. 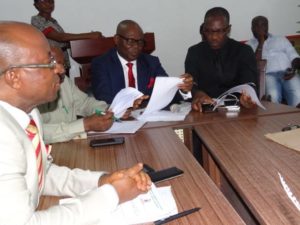 The meeting which had in attendance Commissioner for Information and Strategy, Mr Charles Udoh and his counterpart in the Ministry of Lands and Town Planning, Arch Ime Ekpo, deliberated extensively on the disaffection expressed by the host communities of the International Stadium.

Speaking, Mr Akan Okon who blamed the communities for embarking on the protest described the action as unnecessary explaining that issues raised by the communities would have been addressed if they had approached the government through appropriate channel. 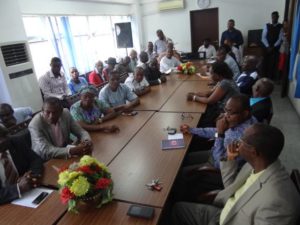 He however warned against a repeat of the mob action saying that it could have degenerated to alarming proportion if hijacked by miscreants and reminded the community leaders of their role in ensuring peace in their domain.

The Special Duties Commissioner spoke of the Stadium as a critical national infrastructure which should be valued, protected and presented, assuring the catchment communities that they would be integrated in the general maintenance and provision of security in the edifice.

On the flooding which he said was a spillover from the retention lake and bad roads in the area, Mr Okon said that the Ministry of Works had come up with a design for controlling the flood and explained that people of the area would soon witness a new lease of life as the drainage project would soon commence. 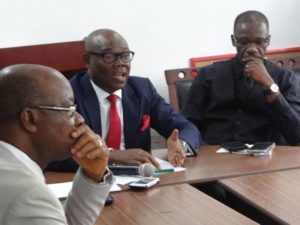 Also speaking, Mr Charles Udoh, urged the communities to always reach out to the State Government through available channel of communication, adding that the State administration under Governor Udom Emmanuel prioritizes the interest of its people.

Mr Udoh noted that the Stadium which has boosted the economy of the area and by extension the state should be valued by the beneficiaries.

The Information boss lauded the village heads for their promptness​ in handling the protest assuring that government would not renege on its promise to the people .

In his contribution, Arc. Ime Ekpo, noted that government cannot fulfil it obligations to the people in a single swop and pointed that government’s sincerity was already demonstrated in the equitable payment of compensation before the commencement of the stadium project.

He assured the communities on government’s resolve to complete every project initiated and called for calm on the part of the communities maintaining that the state administration was committed to addressing their challenges.

Leaders of the host communities including legal adviser of Obio Etoi, Barr. Friday, Uyo Political leader / Transition Council member, Pastor Ime David and Uyo Youth Caucus Chairman, Mr Idorenyin Umoh enumerated their challenges to include incessant flooding, lack of maintenance of the retention lake, poor accessibility to the communities during events at the stadium, security risk associated with impassable roads in the communities, non inclusion of youths in the security and maintenance of the stadium.

They however thanked the State Government for the prompt response to their complaints and promised to cooperate with the contractors in the intervention project earmarked for execution.

It would be recalled that youths in the host communities of the Godswill Akpabio International Stadium (The Nest Of Champions) had, on Wednesday, 4th October 2017, took to the street in protest of environmental despoliation and other issues in the area.