…….The peoples of Mbiaso ward 3, in Nsit Ibom LGA has joined the league of groups in Akwa Ibom State to declare support for the Governor, Udom Emmanuel -led administration, while endorsing Governor Udom Emmanuel and Senator Bassey Albert, for a second term in office, come 2019 respectively. 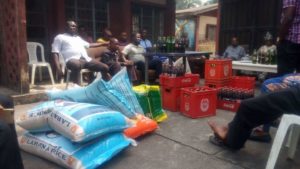 In a motion the stakeholders and the political stalwarts from the ward have risen in one voice from a get-together meeting and in the spirit of Christmas and new year celebrations host by the former Transition Committee Chairman, Nsit Ibom LGA and the political leader of Mbiaso ward 3, Obong Engr. Precious Akpan, at his country home, Edeobom 1, on Saturday, January 6, 2018 to make their position public. 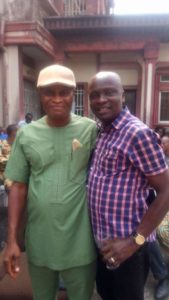 The stakeholders led by Engr Precious Akpan, Nsit Ibom PDP Chapter Chairman, Deacon Rt. Hon. Nsikak Ikpe, Obong Mbebeng, Obong Engr Orok, Ward Chairman, Evang. Gibbson Orok and Hon. Inyene Michael, the ward Councilor, and all women / youth leaders commended Gov. Udom Emmanuel for his ability to effectively manage the affairs of the State in the face of the country’s economic challenges, noting that the impact of recession was not much felt in Akwa Ibom because of the quality of leadership offered by the Governor. 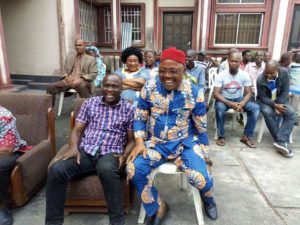 Hon. Engr. Akpan, a renouned business man and a trust worthy son of ward 3 said that the ward have endorse His Excellency Gov Udom Emmanuel & Obong Bassey Albert for 2019 base on their merits. He maintained that these people have made our state proud. 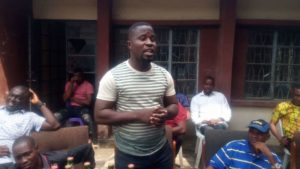 According to the political leader ” So we decided to come together to interact and share in the spirit of New Year celebrations in which today I stand here to accept my nomination as the political leader of this ward, and I have done this by donating a live cow, goat, with funds to consolidate my position. I want to promise that I will lead the ward as a father to all. ”
” We also thank those who contributed to our Christmas / New Year gifts to ward 3. Most especially His Excellency Mr Udom Emmanuel, Distinguished Senator Bassey Albert, and others we pray God to bless them. “ 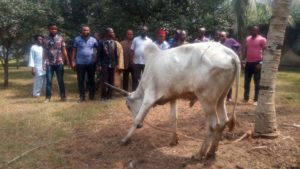 “It is our pride and a joy to me as a person that Rt. Hon. Nsikak Ikpe, my political son whom I treasured has performed excellently. He is a quality that is able to make positive things out of nothing. He has put a smile on the faces of all Nsit Ibom people.” 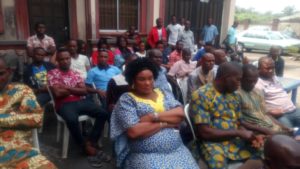 He further stressed that Hon. Eric Akpan, Executive Chairman Nsit Ibom L G A, is a promising body just enthrone. It is also certain that he will perform to satisfaction and above all, he is sincere. He also thank Hon. Inyene Michael, the ward Councilor for his leadership sterling qualities and pray for him to have a successful tenure as his time beacon. Bassey Albert a Senator, I could describe him as a pivot in A’Ibom politics, that man has tried and if I didn’t thank him I would have thank him for the Solar water project he has sited in the ward may God bless him, he added.

Also speaking, the PDP Chapter Chairman, Deacon Rt. Hon. Nsikak Ikpe, said they were happy to come together as a ward and party stakeholders to celebrate New Year and thank the political leader for consolidation of his position with a live cow to the ward.
In addition, he thanked the immediate past Transition Committee Chairman Nsit Ibom, Obong Victor Umondak for the smooth transition of government.

In his statement he further make it clear that all the stakeholders from Uyo Senatorial District gather to take a decision that no other person apart from Obong Bassey Albert, has the capacity to serve as a Senator for now and as such he was unanimously adopted for 2019 in which Mbiaso ward 3 will stand by it.

In addition to what the political leader and the Chapter Chairman has said, the eight villages which makes up the ward, village heads, women and youth, who spoke through their representatives further highlighted that the governor is fulfilling the dreams of A’Ibom and pledge total support for the Governor, Senator and Hon. Eric Akpan led administration at the grassroots.
The Councilor of the ward who is the deputy chief whip, Nsit Ibom Legislative Council, Hon. Inyene Michael, thank the political leader and the stakeholders for choosing this time of the year to meet and noted that the meeting was quite successful. He sized the time to thank the youths for their conducts during and after the local government elections that brought them into power.

While In Michael’s words, ” today, it is very obvious that I stand here to say that I am the most luckiest Councilor in Nsit Ibom with the timber and caliber of people I have in the ward in the likes of my boss, International President Mboho Mkparawa Ibibio and Senior Special Assistant to Governor on Tourism Development, Obong Monday Etokakpan, Obom Nsit, Obong Precious Akpan, Rt. Hon. Nsikak Ikpe and so many others who is contributing towards making PDP the only party in the ward, with all these efforts Mbiaso ward 3 will return PDP 100% come 2019.”