Prelate Sunday Mbang has seen a lot while sitting than many would be able to see while standing. This seems to be the case in the recent article by Mr. Franklyn Isong, publisher of Radar Newspaper, whose major headache is that Mbang along with other clerics chose to rally support for incumbent Governor Udom Emmanuel instead of straying along with Senator Godswill Akpabio and his preferred candidate Mr. Nsima Ekere. 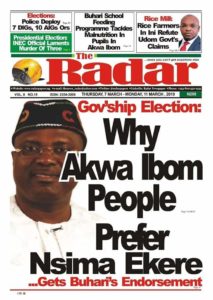 From time immemorial, God always used his prophets to anoint leaders for his people. Eli as a case study was upright and favoured by God, the only sin recorded against him, which made the glory of God depart from him, and for which he was punished gruesomely, was his failure to admonish his children who had erred. What is wrong if Prelate Mbang, a man who has always been above board in petty eye service, rebukes Sen. Akpabio from bombing Akwa Ibom State with Warsaw as he threatened? Incidentally, Samuel who took over from Eli, learnt from his boss’ weaknesses, he promptly anointed Saul as king and when he failed, Samuel obeyed God and anointed David as a successor. Bible scholars recount how on numerous occasions, Samuel had condemned Saul’s ignoble actions, an example found in 1 Samuel 28:17 “for the LORD has torn the kingdom out of your hand and given it to your neighbor, to David.” So what then is wrong with Prelate Mbang saying that Senator Akpabio was behaving like the prodigal son in the Bible who reportedly dine with pigs and as such needed prayers to repent. 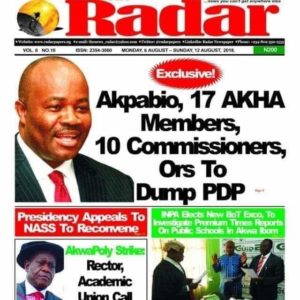 It must be established that Senator Akpabio did not invoke warsaw on Governor Udom Emmanuel, but on Akwa Ibom State. The only state our religious, traditional rulers and even indigenes have in this country. These are people who had witnessed the world war and have seen the effect of recent wars in other places. No SANE indigene of this State would support the idea of war in Akwa Ibom NO MATTER WHO is behind the idea. 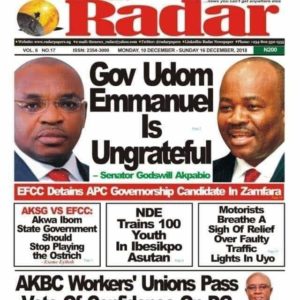 In an address he presented on behalf of all religious leaders in the state, Prelate Mbang was not addressing personal issues between Senator Akpabio and Governor Udom Emmanuel but issues that threatened the peaceful coexistence of the people as one entity. Issues that tended to cause disaffection among Akwa Ibomites including Prelate Sunday Mbang and Mr. Isong. These were issues of Warsaw, unguarded utterances, ignition of unhealthy rivalry among different politicians, militarisation and intimidation of the electorate as noticed during the Presidential and National Assembly elections, unlawful arrest of citizens by the Nigerian police and the military, the claim by Vice President Osinbajo, who is not just a Christian like him but also a Pastor, that the APC would forcefully take over Akwa Ibom, imposition of candidacy on the people etc. 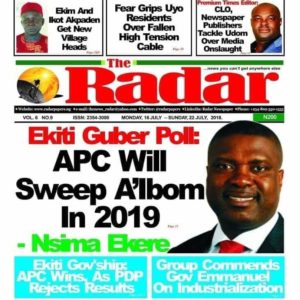 Franklyn saw nothing good in the support to Governor Udom Emmanuel as expressed through his endorsement by religious leaders in Akwa Ibom. But he seems to have turned blind eye to events of 2010, when the former Governor of Akwa Ibom State, Godswill Akpabio was endorsed by the then state CAN chairman, Bishop Cletus Bassey who even gave him a symbolic gold plated giant key which he called the master key to Hilltop Mansion 2011. At the Ibibio Nation reception at Asan Ibibio on October 10, 2010, Bishop Cletus Bassey also conveyed the message of the Christian leaders to the people of Akwa Ibom State and prayed for Akpabio’s re-election. It begs the question to say that Religious leaders in Akwa Ibom State have always set a template for the people, who are majorly Christians. One should not forget that these religious leaders are also Akwa Ibomites, as such; they have the right to be involved in the happenings of this state as policies made by the government would not just affect them but those they lead.

We have it on good authority that before Mr. Isong’s infamous meeting with Senator Godswill Akpabio two years ago, he was an ardent critic of the senator. He confessed that Akpabio invited him to a private meeting in his house in Ewet Housing and following that meeting, he ceased to see anything wrong with the actions of the Senator as Isong became his friend and supporter. There’s nothing wrong in being friendly with Senator Akpabio but a friend IN NEED IS A FRIEND INDEED.

It is often said that if a word is uttered once, it could be excused as a mistake. Mr. Isong who claims to be a civil rights advocate was privy to the war cry by Senator Akpabio, in which he vowed on four separate occasions, at different fora, on different days to invade Akwa Ibom (NOT UDOM EMMANUEL) in a manner akin to the invasion of Warsaw in Poland by Late German Nazis dictator Adolf Hitler, which led to the dead of hundreds of thousands of people. Why did Mr. Isong not make any comment to express concern for the safety of our state and the lives within? Why did Mr. Isong not rebuke the actions of Akpabio when he tore Governor Udom’s picture apart and placed in the Bible with some kolanuts to perform incantations? Why did Mr. Isong not condemn the ridiculous outburst made by Akpabio that by December 31, 2018 that Governor Udom Emmanuel would be left alone in Government House? Why didn’t Mr. Isong condemn Akpabio’s ridiculous assertion that if Udom Emmanuel should win election, he should not be buried in Ukana? How did Prelate Mbang cause Akpabio to make a statement that provoked the sensibility of all Christians in the State, when in apparent spite of the campaign slogan of #OnlyGod, he asked, “Where was God when I made Udom Governor in 2015?”

If truly Franklyn was sincere in his friendship with Senator Akpabio, these are things he would have advised the senator from doing, rather than waiting to later turn his nozzle on Prelate Mbang, who was only acting as a mediator for Akwa Ibomites, a role he had played right from the dark dictatorial days of the Military rule in Nigeria. It is on record that the fathers of faith in Akwa Ibom State have always been intercessors in this state, especially in the affairs of leadership, where they remain committed to ensuring that no leader leads the people astray and that the people follow the path of righteousness and Peace and Development, which the founding fathers built Akwa Ibom on.

While it is true as Mr. Isong noted that the fathers of faith gave huge support to Akpabio throughout his tenure as a Governor, he should not forget that they also owe the same support to the incumbent Governor, Udom Emmanuel, especially since he has performed creditably well.

Retrospectively, Franklyn Isong has a poor history of always supporting failed politicians. In 2007, he was an active exco member of the opposition party, supporting James Iniama of the AC who failed woefully to Godswill Akpabio. In 2011, Mr. Isong was in the media campaign team of Senator John James Akpanudoedeghe, he campaigned on all platforms he could find himself but the same FATE of failure befell him. In 2015, Mr. Isong had established the Radar newspaper, which became the official mouthpiece of Mr. Umana Umana’s campaign organization, and as expected, hos candidatelfailed to Udom Emmanuel. It was not surprising in 2019, when Mr. Isong decided to pitch his tent with Nsima Ekere of APC that he would still lose as usual.

Two days to the election when ALL CAMPAIGNS HAD ENDED, Franklyn chose to come out with an infamous banner story on the cover of his newspaper, titled “Why Akwa Ibom people want Nsima Ekere”, with a rider “…gets President Buhari’s endorsement”, which was a myopic and biased approach to politics by a journalist who claims to be unbiased. It was not only against the code of his profession but unethical and false, as his candidate was widely and roundly rejected in Akwa Ibom State, right from his immediate community. Why would they have supported him when he couldn’t impress them as the Managing Director of NDDC by solving the immediate problem of his people in Edemeya. Till date, the wooden bridge constructed by the colonialists in form of a dead trap, remains the only access route to that community.

Even soldiers who are trained to fight usually choose peace over war. It would be more matured for Franklyn to swallow his regular bitter pill of defeat as he has been served, and wait for 2023 when another unsuspecting prey will fall under his fangs. Prelate Emeritus Sunday Mbang is not the architect of Franklyn’s woes, and deserves nothing short of respect from the self acclaimed public affairs analyst. The Bible has clearly stated, “touch not my anointed, and do my prophet no harm.” If any anointed deserves mention, it should be the Bishop Josephine Eggah, who had predicted victory for Franklyn’s candidate with the following words, ” if Udom Emmanuel wins his re-election, cease to recognise me as an anointed of God.”