…………..Governor Udom Emmanuel today commended Speaker Onofiok Luke and members of the House of Assembly for bringing experience and expertise to bear on the final draft of the 2018 Appropriation law.

Speaking earlier today while signing the 2018 Appropriation Bill of 646.6 billion naira into law, the governor particularly thanked Barr. Luke for ensuring that a thorough job was done on the budget and delivered in time. 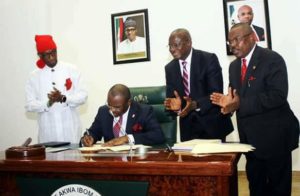 This is against the 651 billion naira which the governor had earlier proposed to the State House of Assembly.

He said: “Let me once again thank the Speaker, members of the State House of Assembly and most especially, the Chairman House Committee on Finance and Appropriation for a job well done.

He has put in a whole lot; he went round to make sure he did the right thing and followed the due process.”

Governor Emmanuel signed the budget this morning in a brief ceremony at the State Executive Council Chamber, Government House, Uyo.

He assured that his administration will ensure full implementation of the budget.

In their contributions, Chairman of the House Committee on Finance And Appropriation, Hon. Usoro Akpanusoh said that the Committee took into consideration the needs of the people and effected necessary adjustment to arrive at the 0.7 differentials.

The Commissioner for finance, Mr Linus Nkan said that the consideration of the budget had shown the existing synergy between the Executive and the Legislature as the two arms of government sort each other’s contributions for the passage of the bill.

The budget was earlier passed into law last week by the State House of Assembly.