Whenever one visits a developed country in Europe, America and some part of Sub Saharan Africa, he must have some exciting experiences. One of the very exciting one is that certain basic services such as electricity, water and transportation are provided, not as luxuries but as the necessities of life.

Stable and and consistent supply of power make life and businesses thrive. It reduces the cost of living, as the citizenry do not have to buy PMS (petrol) for their China/Korea made generators, which is exploitative on the people. This stretches the income of an average Nigerian, particularly, in the era of biting economic recession.

But the fortunes of power supply has improved today as Akwa Ibom, under the very thoughtful, bold and imaginative leadership of Governor Udom Emmanuel who is leading the way in power/electricity. The Akwa Ibom experience in power/ electricity generation business began with the past administrations of Obong Victor Attah and Chief Godswill Akpabio and given an impetuous boost by the purveyor of Dakkada and captain of the new Akwa Ibom, Mr Udom Emmanuel. 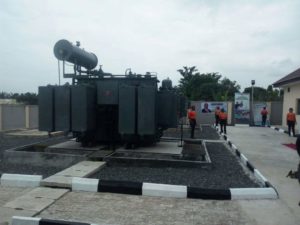 Governor Emmanuel started by revolutionizing the State -owned Power Company, Ibom power with a new administrative and professionals structure and gave the needed support for the workability of the company. He also secured license for the generation of 685 megawatt by Ibom power and rehabilitated the power holding facilities in Ekim, Mkpat Enin and others in Ikot Ekpene. His Excellency also provided and ensured the workability of the 300kwA substation at Wellington Bassey Barracks, Ibagwa Abak.

To ensure that Ibom Power operates at 80 percent, a GT2 has been configured and commissioned, while a ‘dead bus’ which enables Akwa Ibom to pilot the national grid in any case of national power outage , were provided by Governor Emmanuel.

The most spectacular of these, which has glaringly blazed the trail in power production in Uyo Metropolis was the construction, completion and commissioning of a 33/11 Kv, 2X15MvA injection sub-station at four lanes area of Uyo.
This has enabled residents of Uyo Metropolis to enjoy electricity for a minimum of 18-20 hours daily.

Governor Udom Emmanuel assertion on the strides of his administration in power/ electricity during the 29th anniversary of the state creation puts paid to this.
“I am the only Governor in Nigeria who generates more than 150 megawatts of electricity. And you can check, there are some communities where the rate of vandalism is low; they enjoy electricity in the average of 18-20 hours daily”.

Shedding light on the improved supply of electricity in the state, Dr kingsley Udoh, a lecturer with the University of Uyo said that the stable supply of electricity is a good and appreciable development in the state that would bring about meaning development in the state. ”It memontous and unparalleled in the annals of Nigerian history and worthy of note Akwa Ibom is leading the way in power and electricity supply”, he said. This obviously would have significant impact on businesses and the process of industrialization which Governor Udom Emmanuel is piloting.
Corroborating this, It must be noted that recently, a published document by the National Budgets office shows that Akwa Ibom ranks second in Foreign Direct Investment (FDI) in Nigeria, after lagos State.

Also, a healthy and joyous citizenry engender a strong and viable optimum population, which is critical to the attainment of economic growth and development. With these salient developments in place, there is no gainsaying the obvious that Akwa Ibom is the leading light of Industrialization and Electricity supply in Nigeria.