………..The people of Ikot Abasi LGA in Akwa Ibom State on Friday declared their unflinching support for the re-election of Governor Udom Emmanuel. 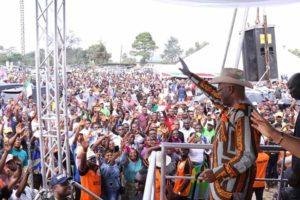 Speaking through their Leaders at the Ikot Abasi Government field, venue of the Governorship campaign rally of the Peoples Democratic Party, the people said their support for the Governor is irrevocable, not withstanding that their son, Mr Nsima Ekere of the All Progressive Congress is in the race.

Addressing the crowd, Governor Udom Emmanuel charged the people to be steadfast in their resolve to return a government that is committed to maintaining peace and and security of the state. 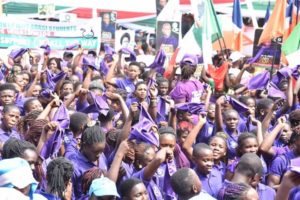 He noted that the reason the APC decided to flag off their campaigns in the state was a confirmation to the fact that Akwa Ibom is safe and secure.

The Governor enumerated his achievements in Ikot Abasi to include the restoration of power supply and promised 24 hours uninterrupted electricity when the Ekim Power Station is commissioned in the next few weeks.

Governor Emmanuel noted that development is in a ‘geometric proportion’, and charged the people of Ikot Abasi to guard jealously the MD of the Niger Delta Development Commission (NDDC) position, as it would take another 32 years for the office to rotate. 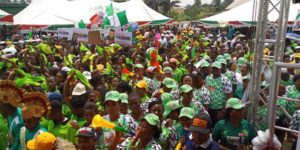 He reiterated his commitment to resuscitate the Aluminium Smelter Company of Nigeria (ALSCON) sited in Ikot Abasi.

Earlier, former Military Governor of the state, Air Commodore, Otuekong Idongesit Nkanga, in his remarks, said that Udom is a Governor that Nigeria wants till 2023, adding that he is a symbol of peace and prosperity.

He urged the people of Ikot Abasi not to exercise any fear about the so-called federal might, saying that federal might will meet both unit and God’s mights. 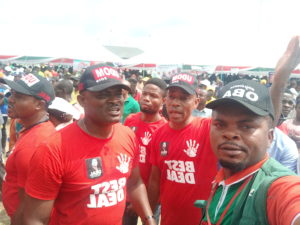 “The only bridge in Ikot Abasi is not working. No light, no water, Governor Udom has taken up all those things to do. Udom has brought prosperity to Akwa Ibom, we want that prosperity to continue.”

The State PDP Chairman, Obong Paul Ekpo in presenting candidates of the party thanked the people of Ikot Abasi for coming out in their numbers to receive the best performing Governor in Nigeria, noting that indigenes of other states of the federation are praying for their governors to be like Governor Udom Emmanuel.

He said Governor Emmanuel has done exceedingly well, and charged the people not to make wrong choices, adding that Udom is right and has been anointed for Governor from 2015 to 2023.

Rt Hon Mathias Idiong who led the defectors to PDP, said that “Action peaks louder than words”. Politics is not for children but for serious minded people. You are the serious man having created 15 industries in just three and a half years in office.

“This is a clear indication that you have the interest of Akwa Ibom people at heart.”

One of the defectors from the APC to the PDP, Engr Imo Okoko, said that the light in Governor Udom Emmanuel and PDP inspired their decision to dump the broom for the umbrella party.

“I was a member of the APC caucus, we saw that there was no more light in APC, the light is in PDP, so, we have seen the light and followed the light. Ikot Abasi people are in PDP. God bless Atiku, God bless Udom Emmanuel. There is so much darkness in APC. The light we have been looking for is shining in PDP.”

Chairman of Ikot Abasi LGA, Rt Hon David David Edet commended the Governor for his developmental projects in the area, and assured of 100 percent votes in the forthcoming general elections.

Comrade Etini Ayara, Obonganwan Mary Umana and Obong Obot Etokafia who spoke on behalf of the youths, women and elders of the area respectively assured Udom Emmanuel of massive votes to return him to the Hilltop Mansion for continuity of his superlative performances.

Son of the soil and MD of Hensek Ltd, Engr.Uwem Okoko announced that they have registered 25,000 people with PVCs for the rally. “We will give Nsima Ekere our brother 5% because he is from Ikot Abasi. The rest 95% is for you. Everything Ikot Abasi wants, you have given to us.” He added.

High point of the event, was the presentation of flags to the party’s candidates in the forthcoming elections in the state.