IN THE NEWS: GOV. UDOM APPLAUDS ARRIVAL OF MILITARY JOINT TASK FORCE TO EXTERMINATE CRIMINALITIES IN THE STATE

…………….Coming as a strong booster to his remarkable passion and efforts at ensuring a peaceful and crime-free society for his people and their development, the arrival of the Niger Delta Military Joint Task Force to stamp out all forms of criminality in Akwa Ibom State has been highly commended by Governor Udom Emmanuel. 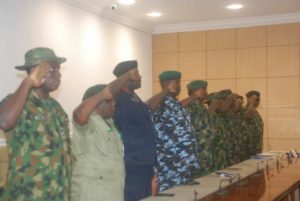 Mr. Udom who made this commendation at the Government House in Uyo during a courtesy visit to him by the leading officers of the Joint Task Force, noted that the coming of the special military task force to the State would greatly assist in the quelling of series of violent criminality that have been bedeviling some parts of the State in recent times. 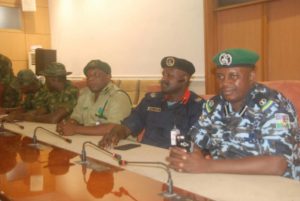 Represented by his Deputy, Mr. Moses Ekpo, the Governor lauded the officers and men of the Military Joint Task Force for their exceptional sacrifices for the peace and security of the country, and stressed that no meaningful development could take place in any society in the face of insecurity and violent crimes. 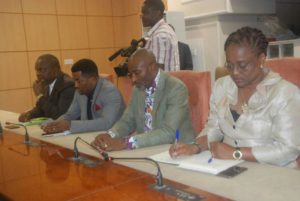 He enjoined the Task Force to make its presence in the State a significant one to perform excellently so as to endear itself to the people and relate mutually for the overall benefit of the State and the country. 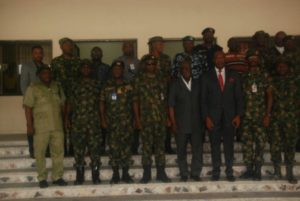 The Governor assured the Joint Task Force of his Government’s ever-ready supports for their operation to accomplish its set objectives successfully, and urged them to feel free to contact the Government at any time when in need of any assistance within its capability.

Earlier in his address, the Commander of the Niger Delta Joint Task Force, Rear Admiral Apochi Suleiman, disclosed that his team is basically in Akwa Ibom State to protect infrastructure, prevent criminality, and stamp out cultism across the State and the Niger Delta zone with a view to ensuring that peace and safety of the people reign supreme.

Rear Admiral Suleiman revealed that the Task Force is directly under the supervision of the Presidency, and consists of the Army, Navy, Air Force, and the Police.

He commended the State Governor for his impressive developmental strides in the State and his remarkable contributions for a peaceful and secure Akwa Ibom State and Nigeria at large.

The Task Force Commander solicited the continued support of the State Government and the cooperation of the people of the State to make their assignment a worthwhile one in which all forms of violent restlessness and criminality in the State would give way to a peaceful, calm and safe place to live in.

He noted that the State is a major contributor to the development and well-being of the country, and deserves to enjoy adequate security, safety and peace for its continued development and growth, and for the betterment of the people.