IN THE NEWS: POWA TO PARTNER FEYReP TO CURB RAPE IN THE STATE

……..The Police Officers Wives Association (POWA), Akwa Ibom State chapter says it will partner with the Family Empowerment and Youth Reorientation Path- Initiative (FEYReP), to combat rape, defilement and other obnoxious practices meted towards women in the state. 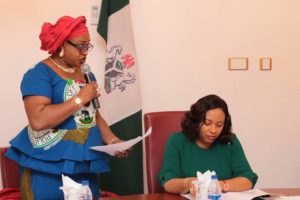 The acting chairperson of POWA in the state, Dr. Miriam Enwonwu disclosed this today when she led her executive on a courtesy visit to the wife of the Akwa Ibom state governor, Mrs. Martha Udom Emmanuel at the government house, Uyo.

She stated that the synergy will help strengthen and improve on the existing legislations and bring stiffer sanctions on offenders of such sordid, abominable and condemnable misconducts.

Dr. Enwonwu said since her assumption of office as the chairperson of the association in the state, she has witnessed the various unprecedented achievements recorded by the governor’s wife pet-project, and as such consider it expedient to partner to do more.

The POWA chief added that as an organization, they are already working on modalities to sensitize its members in the state command and the public on the danger of mental torture and depression, HIV/AIDS, and other sexually transmitted diseases connected to rape and defilement. She however appealed to the governor’s wife to help the organization in its secretariat project, saying it is a herculean task to function well without a befitting place of operation. 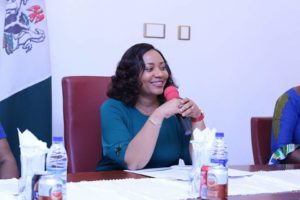 Responding, the wife of the State governor, Mrs. Martha Udom Emmanuel thanked the group for the visit and for promising to partner her non-governmental platform to touch more lives.

She informed the visitors that FEYReP’s effort at curbing rape and sexual violence against women in the state has yielded much result as cases in such crime has drastically reduced in recent times and culprits have been made to face the full wrath of the law.

Mrs. Emmanuel however encouraged the association to work on empowering its members especially widows of fallen officers to be self-reliant, saying when women are empowered, the society will be better off.

While admonishing them to continue to be a pillar of support to their husbands, the governor’s wife further asked the group to help sensitize its members on the need for family planning, cleanliness and ethical reorientation within the barracks, adding that it will help shape their views about life.